In a truly out of this world sight, a small asteroid hurdling towards Earth was tracked by scientists for three hours where its trajectory brought it over the skies of southern Ontario over the weekend, according to London, Ont.’s Western University.

According to a press release from Western University, just before midnight on Nov. 18, the Catalina Sky Survey in Arizona detected a small celestial object heading towards Earth.

A small asteroid, now named 2022 WJ1, was tracked by multiple observatories around the world for three hours as the object travelled towards Earth and traversed across the sky over southern Ontario, where it made impact over at 3:26 a.m. on Nov. 19.

The advance warning of the asteroid gave researchers of the Western Meteor Physics Group and the Institute for Earth and Space Exploration (Western Space) the opportunity to move outside and position themselves to watch the inbound fireball.

According to Western, David Clark, a geophysics doctoral student, drove to the predicted fall area in the early hours of Sunday, and parked near Niagara-on-the-Lake at the intersection of Highway 403 and Niagara Regional Road 55 where he witnessed the fireball with his own eyes.

“It passed right overhead at the predicted time and was distinctly green in colour,” said Clark in the release. “Several minutes later a noticeable sonic boom could be heard.” 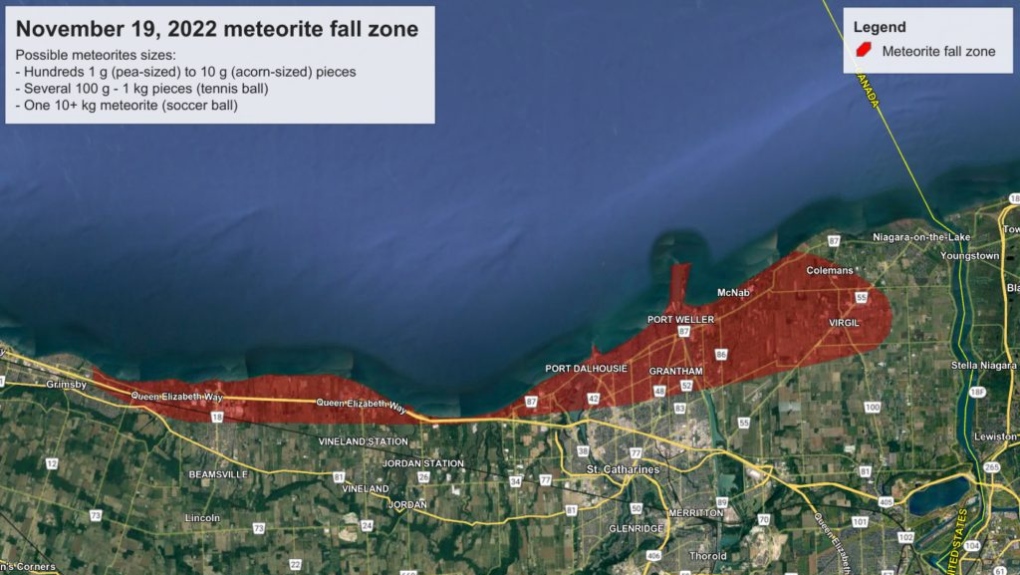 The meteorite fall zone of a small asteroid that travelled across southern Ontario on Nov. 19, 2022. (Source: Western University)

According to Western, fragments of the meteor likely made it to the ground near the southern shore of Lake Ontario, mostly north of St. Catharines.

“I watched from Brescia Hill on the Western campus. Though cold and windy, the hill had a clear view to the east, where I expected to see only a distant flash. Then the fireball suddenly appeared, passing almost overhead. Wow! It was easily visible between broken clouds and noticeably orange-red,” said Wiegert in the release.

Although this meteor was observed on the night of Nov. 18— the same night as the fireball detected by Western University — it is not clear whether the two events are connected.

Only six other asteroids in history have had advanced warning prior to their impact, and Western said this is the first predicted event to occur over a heavily populated area and within range of scientific instruments.

This discovery is something that has Canada Research Chair in Planetary Small Bodies at Western’s Peter Brown excited about what lies ahead.

“This remarkable event will provide clues about the makeup and strength which when combined with telescopic measurements will inform our understanding of how small asteroids break up in the atmosphere, important knowledge for planetary defence,” Brown said in the release.