EastEnders briefly made contact with reality… and it was beautiful

OVER on EastEnders, this week, little Tommy Moon slightly underplayed the disaster that was about to hit the Square when he said: “The twins have done something terrible.”

For it was a worse calamity than he or any of the show’s other little toe-rags ever thought possible.

They’d invited Shane “Alfie Moon” Richie back, without a packet of Daz, but armed with a dangerously open-ended question for Kat Slater: “What’s going on here?”

Well, where the hell do you start, without mentioning the catastrophic ratings decline?

But the short answer, I suppose, is “Same s**t, different names”. For if a woman hangs around Walford long enough she will eventually have to marry Phil Mitchell. And, on Monday, it was meant to be Kat’s turn. 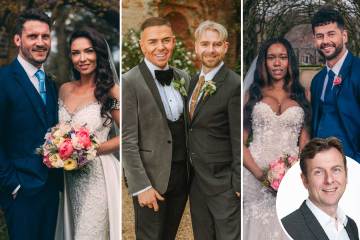 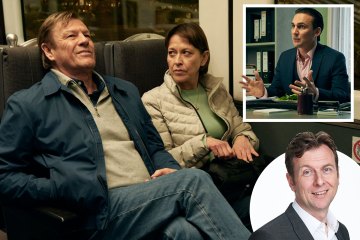 News which surprised Alfie almost as much as it pained him, because the last time he appeared on EastEnders, in 2019, Phil was threatening to kill Kat.

If he wants to survive in this hell pit, though, Alfie will quickly have to re-adjust to the fact it’s not just Kat, it’s the entire E20 postcode that’s suffering from mass amnesia.

To give but one example, last month, Ranveer Gulati was beaten to death with a clock, by his son Ravi, while attempting to rape Suki ­Panesar, but was then forgotten about as completely as McKlunky’s chicken shop and The Queen Vic’s mixed-gender football team.

A plague of attacks and ­lectures that was going to continue, Frankie assured us, until: “Boys were educated.”

An unusual way to try to attract young viewers, but you get the picture, I hope?

EastEnders was in yet another frenzy of righteous woke fury when real life intruded in the saddest ­possible way, last week, with the death of the Queen. One of those seismic national events that forced the show to do a late insert. Personally, I always dread these moments, as they’re usually dictated by football, which is another working-class passion EastEnders clearly disdains.

So it either involves dialogue that sounds more like a Pathé newsreel or a cringe-mongering scene, like the all-female conga round The Vic, which marked England’s women’s Euro victory.

On Monday the perilous task fell to Kathy Beale and Denise Fox, who had to engage in a few wistful reflections with the soap’s token royalist, Linda Carter, whose love of the Royal Family is regarded as an eccentric character quirk by the show rather than the natural order of things, as it is in the real London.

Just at the moment I thought EastEnders had blown it and was going through the motions, though, something rather unexpected and magical happened. Linda placed a ­picture of Elizabeth II in front of the Queen Victoria bust and said simply: “Look after her, won’t you.” In terms of the sentiment and economy of words, it could hardly have been more beautifully judged or affecting.

The reason it had extra impact, though, was that, just for once, EastEnders was being led by the spot-on instincts of its viewers who, as the past week’s incredible scenes have demonstrated, are driven by a deep sense of patriotism and love for the Queen.

This is highly unusual for the BBC1 soap, which has recently given every ­indication it regards the working class as sexist, racist, homophobic monsters who, without their constant hectoring, would be forming right-wing terror cells like the Aaron Monroe-led gang who tried to blow up ­Walford’s since forgotten mosque at the turn of the year.

It’d be nice to think Monday marked the point EastEnders ceased hostilities, stopped regarding all men as b*****ds and women as their long-suffering victims who’ve all got the inexplicable hots for Phil Mitchell.

But last time I looked, Kat’s wedding was back on and Tracey, the silent Queen Vic barmaid, had just claimed Phil was: “The best sex I ever had.”

A CONFRONTATION for the ages on Sunday’s episode of Celebrity SAS: Who Dares Wins.

On one side of the table, Mark “Billy” Billingham MBE, Warrant Officer first class, who served his country for 27 years and won The Queen’s Commendation for Bravery.

On the other, Towie’s Ferne McCann, who successfully collected eight stars during I’m A Celeb’s Panic Pit Bushtucker Trial, back in 2015. As a contest then, it was over the moment Billy hit her with these curveballs: “Who are you? And what do you do?”

Two questions that go to the heart of one of SAS: WDW’s biggest problems. Because, on the one hand, you’ve got a voiceover insisting the 14 celebs are “leaving their glamorous lives behind”.

While on the other, you’ve got Ferne, alongside other obscurities like Pete Wicks, Shannon Courtenay, Ashley Cain and Jonathan Broom-Edwards, who aren’t leaving any such thing behind. Plus former Brookside actress Jennifer Ellison, who didn’t really help the viewers out by admitting: “I don’t know who I am or what I’m doing.”

Unlike Ferne though, who tried to bluster it out with Billy, Jennifer doesn’t have a monstrous showbiz ego, but she still has the same tiresome capacity for self-pity as all the young contestants, and claimed: “For the last 11 years, it’s almost like the Jennifer Ellison switch has been switched off.”

CELEBRITY SAS: Who Dares Wins: “My name is Ferne McCann and I guess I’m like a TV personality.”

TIPPING POINT, Ben Shephard: “Occurring in June, the longest day of the year in the northern hemisphere takes place in which season?”

Ben Shephard: “Which European country is known in its native language as Deutschland?”

Ben Shephard: “The chocolate treat Kinder Surprise is typically sold in the shape of which poultry product?”

Absolutely none of the dimwit Masked Dancer judges suggesting the Riverdancing Tomato Sauce character might be Steph McGovern.

And BBC1’s coverage of Scotland’s Service For HM The Queen hitting the skids at the exact moment “special guest” Lulu said: “And the third time I met her I was with Chaka Khan and Anastacia.”

So if everyone could avoid asking Lulu about the first and second times she met the Queen, it would be appreciated, thanks.

AT some point during the BBC’s superb coverage of the week’s sad events, we will all probably have been knocked sideways by the awful realisation: “She’s gone.”

My own came during the Queen’s final journey from Balmoral to Aberdeen – a place I know well and love like nowhere else on Earth.

It’s never looked more heartbreakingly beautiful, though, than it did on Sunday, lined with the people of Royal Deeside, whose tribute was so characteristically dignified and silent it clearly surprised some members of Jane Hill’s BBC team, who’ve become used to far more demonstrative displays of grief, in recent times.

Yet, by honouring her in this way, they demonstrated not only why the Queen chose to live among kindred spirits but why they, in return, loved and embraced this remarkable woman and will ensure her legacy endures forever in Scotland.

PEP GUARDIOLA: “Haaland is a striker that you can’t buy. Unless you pay.”

Jermaine Jenas on Spurs: “They’ve turned up to Lisbon today and not turned up again.”

GREAT TV lies and delusions of the month.

The Big Breakfast, AJ Odudu: “Our next guest is one of the funniest women in the UK. It’s the hilarious Rosie Jones.”

Celeb Cooking School, Sam Thompson: “I’m like chlamydia. You have to take so many pills to get rid of me.”

’Cos he’s actually more like syphilis. A pain in the a*se who’s now got inside my head.

BBC2’s brilliant documentary series The Boys From Brazil: Rise Of The Bolsonaros, which is the best thing on TV at the moment.

Welcome To Wrexham, on Disney+. House Of The Dragon achieving lift-off with its fourth Sky Atlantic episode.

And the timely return of Mortimer and Whitehouse, who provided the most welcome relief from Friday’s events by explaining the science of barbecuing, on BBC2’s Gone Fishing: “No virus can survive over 60 degrees.”

THIS week’s winner is EastEnders’ Sharon Watts and Brian Connolly from The Sweet. Emailed in by Valerie Bowler.

STEPH’S Packed Lunch, Steph McGovern: “For the first time, the top four government jobs do not feature a white man. That’s got to be a good thing, hasn’t it?”

Unless you’re just a different sort of bigot?