A LEAKED military report has revealed that 40 per cent of those entering the UK illegally on small boats were Albanian.

In just six weeks this summer, 1,075 people from the Balkan country made the crossing.

The truth is that a huge chunk — not all — of those crossing are not from war-torn countries.

Those who have sought to deny this should hang their head in shame for being so disingenuous. 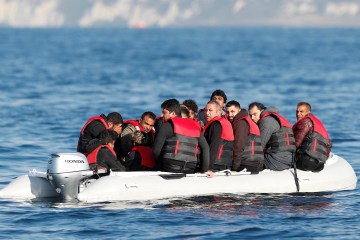 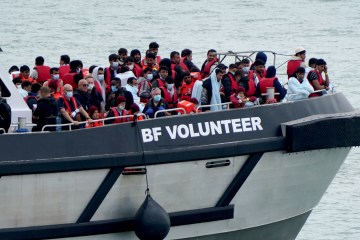 Britain has a GDP 175 times that of theirs, and corruption runs rife.

But the country hasn’t been at war since I was in nappies.

And this week a shocking investigation by The Sun also found that savvy people traffickers are using TikTok to flaunt their smuggling credentials.

An under- cover investigator posing as an Albanian migrant was told by a smuggler that the French would escort them safely into the UK and a solicitor could help them “formulate a good story”.

He boasted that the Home Office would send migrants to hotels and that from there they could “disappear”.

Those of us who have been criticised by lefty “asylum seeker” advocates deserve an apology.

We’ve been accused of malice, xenophobia and being far-right nutjobs for merely questioning the “asylum” claims of so many of those crossing on small boats.

I say small boats, yet The Sun’s exclusive probe has uncovered smugglers selling deluxe “yacht” services for £15,000 a head.

Being anti-migrants in general makes no moral nor economic sense.

Migrants who want to come to Britain go through the legal processes, work hard and make a positivie contribution to British life and should be welcomed. So should genuine asylum seekers.

Migrants who cross on small boats illegally and demand to stay in the country using sham stories and fraudulent means, however, are NOT welcome.

And as these new figures prove, we must exercise robust skepticism about the claims of those crossing from France.

This is not controversial. It is rule of law. It’s order.

Something Britain boasts it is a world leader in maintaining, yet seems to be doing so very poorly.

For a long time, I’ve been lambasted for even making this point.

Why? Because I’m of migrant stock myself.

My loyalty is to the country my loved ones and I call home.

I’m loyal to the idea of order and fairness, not waving through all those who cross the Channel without question.

If you happen to have been born in Britain and are at your wits end about our immigration system, I’ll see your frustration and raise you exasperation, agitation and embarrassment.

Because those mi- grants abusing our generosity are making things particularly difficult for those economic migrants who respect our system, such as my family.

My family’s story is a case in point.

For the Home Office to finally deem them good enough to stay and eventually become British citizens, we had to go through thousands of pounds in legal fees, years of patient waiting and countless nights wrangling with incompetence.

That was, of course, after my mum had to prove her English proficiency and be quizzed about “life in the UK” before taking the Oath of Allegiance to Queen And Country at a citizenship ceremony.

The long, arduous journey for those who navigate the immigration system legally is why people like me — and my mum — are so angered when the system is exploited by conniving smugglers and frauds in dingies.

Those who say economic migrant Channel crossing numbers are overblown have been exposed as out-and-out gas-lighters.

“It’s all in your head. You’re going crazy. Nothing to see here,” has been their retort to concerns many raise about the authenticity of a considerable portion of asylum claims.

In light of these new figures, it gives me no pleasure to say: “We told you so.”

The generosity of those who live in Britain and work hard to prop up our bloated state, in the hope it is run fairly and properly, is running on empty.

These revelations should be an impetus for whoever is the next PM to tighten the rules.

Then migrants in genuine need can come here safely, those who take legal routes for economic migration remain protected and the fraudulent migrants hiding in plain sight can be swiftly identified and removed.

DICK’S RIDE IS TO STAY

THERE is no rest for the wokest.

Taking offence isn’t just their bread and butter, they’ll take a serving of offence for breakfast, lunch and dinner given the chance.

In the latest episode, parents attending York Dungeon’s Dick Turpin attraction have complained that the spooky ride named after the infamous highwayman hanged in York must be changed.

“Dick” is far too offensive for small ears and should be referred to from now on as “Richard Turpin”.

Props to the manager, Mark Mattinson, who responded to this pathetic display with: “We’re here to say that Dick is here to stay!”

He continued: “The York Dungeon is renowned for revealing the deepest and darkest secrets of the city’s unique past – whether that includes Dick or not.

“Our Dick’s back carriage ride is the grand finale of our York Dungeon tour, and thousands of guests have already enjoyed this thrilling end to their visit.”

I wonder if he managed to say all that with a straight face.

It seems to me that it’s the red-faced parents who need to get their minds out of the gutter – or should I say dungeon?

THE NHS in Wales has come under fire for removing the words “girls” and “women” in health guidance.

Those things only girls and women have.

The publicly funded online campaign “Bloody Brilliant” was commissioned by the devolved Labour government to “break taboos” around menstruation.

You’d think health guidance driven by scientific evidence would want to mention that only biological females can menstruate.

Alas, even muttering biological facts about the sexes is a cardinal sin in 2022. Instead, the website refers to women as “people who bleed”.

How hypocritical of them to suggest they’re “breaking taboos” when they can barely bring themselves to discuss the topic properly.
NHS Wales seems to have lost their bleeding minds.

I LOVE A REAL OLDER MAN, JUST LIKE HAPPY RITA

CONGRATS to Mr and Mrs Waititi!

Millennial Rita has, until now, been romantically linked with men of her own generation – DJ Calvin Harris, the forgotten Kardashian brother and Spider-Man himself Andrew Garfield, to name a few.

But like more and more young women, she’s clearly figured out older men are the way forward.

I’ve dated all sorts of men – some younger, some twice my age (sorry, Mum!) – and can confirm millenial men are a bit crap.

They will take you for dinner, spend half the time checking their notifications, snap every course to post on Instagram, moan about how they’re hungover from a “big lads’ night out” the evening before and split the bill before asking if you want to “go back to theirs”, then adding “oh, by the way, my flatmates will be in”.

Gen X men, on the other hand, now aged 42 and above, still have some sense of what courting a lady like a gentleman is all about.

WHAT a year it’s been for women’s sports.

This year’s Commonwealth Games was the largest female sport programme in history.

England smashed it too, having their most successful Common- wealth Games ever – not long after the Lionesses finally brought it home last month.

I can’t believe we’ve done all this without having the “are trans women women?” debate.

But it won’t be long before the gender zealots claim any future in which trans women are not allowed to share the female sporting success pie is deeply transphobic.

Women can achieve amazing things in sport when they are allowed to thrive without interference from gender dogma.

Let’s keep it that way.

TIFF 2022 capsule reviews: 'The Whale' and 'North of Normal'