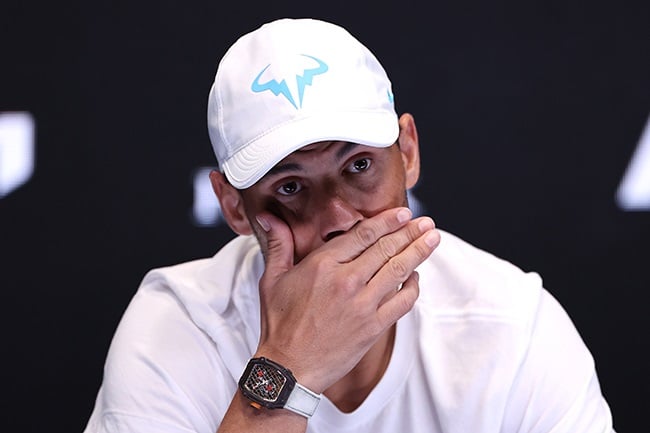 A dejected Rafael Nadal speaks to the media after losing to Mackenzie McDonald at the Australian Open. (Photo by Cameron Spencer/Getty Images)

Rafael Nadal admitted to feeling “destroyed mentally” after a straight sets defeat to American Mackenzie McDonald in the Australian Open second round on Wednesday.

At the tail-end of the second set, the Spaniard injured his left hip. The injury significantly impaired his movement and he admitted “to being in a lot of pain”.

Nadal described “not wanting to retire during the match as the defending champion of the tournament”.

“I couldn’t hit my backhand or run, but I was committed to trying my best until the end,” he told reporters.

Nadal, who rallied from two sets down to beat Daniil Medvedev in last year’s final, cut a dejected figure during his post-match press conference.

“I’ve been out for a majority of seven months to recover from my previous injuries and be ready for this tournament.

“So, I really hope that [the injury doesn’t] put me out of the court for a long time, because then it’s tough to make all the recovery again. It’s not only the recovery… it’s all the amount of work that you need to put together to come back at a decent level.

“I don’t know how long this injury will keep me from playing again.”

When asked how he might have performed if the injury did not occur, he was adamant: “I don’t like the word ‘if’ in sport or in life.”

Nadal revealed the motivation that keeps him going despite all of his injury setbacks.

“It’s a very simple thing: I like what I do. I like playing tennis. I know it’s not forever. I like to feel myself competitive. I like to fight for the things that I have been fighting for almost half of my life or even more.”

The 22-time Grand Slam champion was able to put a positive spin on his situation.

“You know, in the end, I can’t complain about my life at all. So just in terms of sports and in terms of injuries and tough moments, I mean, that’s another one. [I] just can’t say that I am not destroyed mentally at the moment.”

What It Was Like Reporting On Suspected Russian Assassinations In The UK, The Subject Of A New Streaming Documentary Series