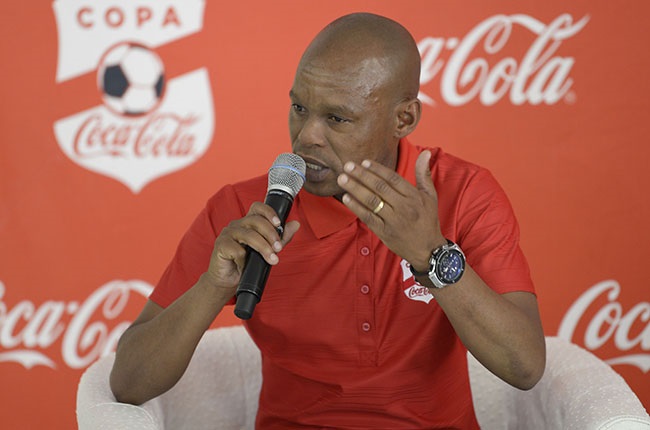 Former Bafana Bafana legend Jabu Mahlangu went two-footed in a viral video on Monday, criticising the standard of Premier Soccer League (PSL) football, and blaming Mamelodi Sundowns, who he said hoarded the players in the country.

The former Kaizer Chiefs, SuperSport and Orlando Pirates star attacking midfielder pulled no punches in the 2min 20sec video that has already been seen by more than 200 000 viewers on Twitter.

Mahlangu was reacting to Saturday’s DStv Premiership encounter between Chiefs and Sundowns that the reigning champions and runaway log leaders won 1-0 thanks to Neo Maema’s glorious 20th-minute strike.

The ex-player, formerly known as Jabu Pule, called for Financial Fair Play to kick into the PSL.

“Let me say, for me personally, I’m battling to watch PSL games. The standard of the PSL has dropped too low.

“We had suggested the idea of having Financial Fair Play in the PSL – any fan obviously wants their team to win all the time – but this thing that’s happening now, it means the national team is dead now.

“Let’s tell the truth and stop favouritism but something must be done.”

Mahlangu said Sundowns vacuuming up the best talents in the country was detrimental to Bafana Bafana’s prospects of getting to their former glory.

“These are top players that are meant to be playing in other teams. But they (Sundowns) say they want to help Bafana Bafana to be the best again but it’s not going to be possible because all our best players are couped up in one team and they don’t play.

Get the Sport Report to stay up to speed with everything you need to know in the world of sport.

“I don’t know [what must be done]. I’m happy that some fans are talking about this on social media and that something must be done now.

“We can’t have all the top, talented players in the PSL sitting in one place and now playing. How are we going to improve?”

Mahlangu added: “Even Kabo Yellow (Yellow Nation, Sundowns) know that what they’re doing is destroying South African football. I’m not being personal, so please don’t swear at me, we’re just talking about football.”

However, former Pirates treble winner Daine Klate pushed back at Mahlangu’s comments, suggesting that other clubs needed to lift up their socks instead.

“I think lets leave Sundowns and start talking about what the rest must must do to get to that level!!!! Some dont have training facilities how will success arrive?” Klate wrote on his Twitter account.

I think lets leave Sundowns and start talking about what the rest must must do to get to that level!!!! Some dont have training facilities how will success arrive?

I think the rest just needs to catch up with Sundowns, if they dont then Sundowns must win every season. The work and process they followed over the years took a lot of time!!! So credit for all the investing and the success is well deserved!!

“We cant talk of FFP when there’s no transparency. What are you basing your argument on, speculations? Just like in other leagues there’s been a shift in dominance. Some adopted and others did an introspection.”

We cant talk of FFP when there’s no transparency. What are you basing your argument on, speculations? Just like in other leagues there’s been a shift in dominance. Some adopted and others did an introspection.

Fun fact: Stellenbosch fc has the richest owner in the league

L.A. Affairs: I found love and joy at 74. Then the pandemic happened