BACK when he was at business school in Silicon Valley, Rishi Sunak would occasionally play poker.

The stakes weren’t high — he and his mates would throw in $20 or so — and the winner would treat everyone to a round of drinks.

Clean-living Sunak, a teetotaller whose day now begins with a gruelling 6am workout on a £1,750 Peloton fitness bike, was never a natural gambler.

Yet in recent weeks he has bet everything on succeeding Boris Johnson as Prime Minister.

With his rival Liz Truss now widely tipped to win, he has just over a month to reverse his fortunes.

The question is how? 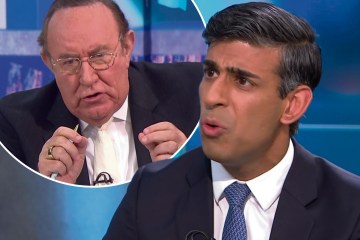 One thing’s for sure: Continuing to focus on “sensible, honest” measures, to tackle borrowing and inflation on the promise of a return to traditional Conservative economic values some time in the distant future, won’t work.

The majority of the 150,000 Conservative Party members who will decide the outcome of this contest are appalled by the historically high taxes Sunak imposed as Chancellor, and will not vote for more of the same.

His tin ear to the howls of dismay from traditional Tory voters over his high tax, high spend, low growth agenda — something that dominates every single discussion among grassroots activists about the direction of this country — has been a catastrophic mistake.

As Truss has so successfully demonstrated, all his rival needs to do is pledge the opposite, and keep the debate focused squarely on this issue.

To stand any chance of winning, the former Chancellor must now move the battle away from ground that he’s already lost (the economy) on to territory that he can still win — namely, how to re-shape Britain so that it remains one of the greatest countries on Earth. Like any politician asking for the honour of leading a country, he needs to sell a dream.

Without diminishing the cost of living crisis and the very real hardship it brings, he must argue that there is more to life than inflation and taxes.

He needs to paint a dazzling picture of Britain in 2025, 2030 and beyond: A land of opportunity for all, with faster growth, higher wages and less maddening red tape and regulation — a Britain that has public services to be proud of and attracts the world’s brightest and best.

That vision should be of a truly United Kingdom that continues to exert massive influence on the world stage, a Britain no longer riven by Scottish, Welsh and Irish nationalism and divided by bitter culture wars. Sunak’s Britain should no longer approach Brexit as a damage limitation exercise or source of slightly embarrassed regret, but as the brilliant opportunity it always was — and remains.

In this battle for the biggest of all political prizes, Sunak has many advantages.

He is one of the most intelligent, able and hard-working politicians in this country: a Fulbright scholar with a first class degree from Oxford University.

He is charismatic, engaging and attractive — and nice. I spent the best part of a year researching his life for a biography and found nothing to dislike.

When I was working on that project two years ago, he did not appear to have made a single enemy — quite remarkable for a politician who had reached No 11 Downing Street.

Like any politician asking for the honour of leading a country, he needs to sell a dream

Yet now his campaign is on the floor. His core team of around 20 volunteers — most of whom are very young and working unpaid — are putting in insane hours in an effort to turn things around, but are increasingly demoralised as they see his hopes of reaching the top job slip from his grasp.

Certain high-profile supporters — while still publicly backing their man — are so depressed that they are privately trying to cosy up to Truss.

(A former Cabinet minister who was among his earliest supporters recently sidled up to a leading representative of the Truss campaign and sought to position himself for a job under her premiership. That’s politics for you!)

All the “snakes and knifers” (as one Truss ally dubs them) who contributed to Johnson’s downfall and backed Sunak just because they thought he was unstoppable are now staring in the face of political oblivion.

Gone too will be Gavin Williamson, the cunning political operative who played a key role behind the scenes in the leadership campaigns of the last two Prime Ministers, and “temporary” Chancellor Nadhim Zahawi.

As for the former Chancellor himself, if he loses, he can expect to be offered a job running the Department of Communities and Housing, or perhaps the Environment, Food and Rural Affairs – a prospect he will probably find easy to decline.

Victory now will take the political equivalent of an SAS operation: A parachute landing behind enemy lines in which a small group of highly trained operatives identify and ruthlessly target the enemy’s vulnerability and defy overwhelming odds to change the course of history.

Truss has yet to convey a compelling vision of the kind of Britain she wants to lead. Herein lies Sunak’s big opportunity.

He should remember the skills he displayed as a poker player at university — and dramatically raise the stakes.