OUT in the real world, Sir Keir Starmer’s most attractive feature is that he is not Jeremy Corbyn.

But within the batty confines of Starmer’s own Labour Party, among all those swivel-eyed activists and metropolitan militants, amidst all the hatchet-faced union barons and spotty student radicals, Starmer has one major flaw.

He is just not Jeremy Corbyn.

It’s all a bit awkward.

Starmer’s appeal — such as it is — to British voters is that he is obviously not cut from the same mad Marxist, Brit-loathing cloth as drooling old Jezza, even though Keir tried to get Corbyn elected — not once, but twice!

But not being Corbyn could conceivably spell the death of Starmer’s career. 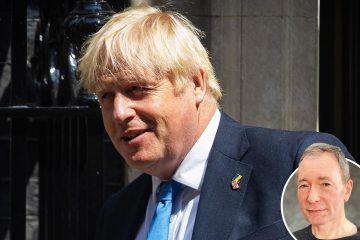 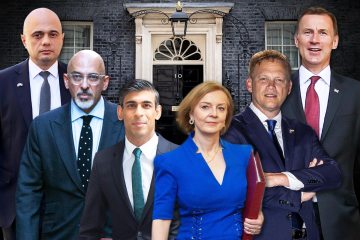 There is a good chance Starmer will not even get to face Rishi Sunak or Liz Truss at the next General Election.

Because the Labour movement is frothing with fury at their leader.

From the backbench MPs to Labour’s union paymasters, the comrades are fuming because Starmer sacked his shadow transport minister, Sam Tarry, after Scarlet Sam was interviewed on a picket line of striking railway workers outside a spookily abandoned Euston station.

But they just don’t listen!

In a typical Starmer fudge, Sam Tarry is said to have been sacked not for appearing in solidarity with the strikers, but for giving unauthorised media interviews.

The brothers can’t see the distinction. “The sacking is quite frankly shameful,” seethed one ­Labour MP.

If the British people wanted to be ruled by a hard-left Labour government, then Corbyn would be pruning his allotment in the garden of 10 Downing Street today.

Boris Johnson’s landslide at the 2019 General Election was at least as much to do with national revulsion at Jeremy Corbyn as it was to do with Bojo’s winning personality.

But Corbyn and his loony left instincts were — and still are — catnip to party activists, who invariably shared his wacky worldview and chanted his name to the melody of Seven Nation Army.

No matter how badly the Tories cock it all up, there is no chance the British people will ever choose a fanatic like Corbyn to run this country.

But Labour wish they still had a leader built in his image. This is Starmer’s historic dilemma.

Sir Keir is clearly aware that if he unequivocally backs the strikers who are currently inflicting misery on ordinary working Brits then he will be yet another Labour leader who cannot win a general election.

But if he condemns the strikes, and if he insists his shadow ministers keep their distance from the militant union leaders, then he immediately haemorrhages support within his own party.

It is possible to imagine how a Labour leader of real courage and vision could turn this summer of strikes to their advantage.

Starmer should be condemning the RMT union for rejecting an eight per cent pay rise without consulting its members.

He should be doing what he can to solve the dispute, not for ever hedging his bets, afraid of spooking the hard-left headbangers.

If Starmer had the bottle to truly stand up for ALL workers — including those who can’t get to work because there are no trains, and those taxpayers whose £16billion paid the wages of railway workers to run empty trains during lockdown — then he would crush the warring, weary Tories at the next election.

Then he would be the true heir to Blair.

But he’s Keir Starmer. Half man, half fence. Fudgefinder General.

And so with Keir, to paraphrase the old D:ream song — things can never get better.

RISHI SUNAK gets stick for wearing £500 Prada shoes during a visit to a building site.

I have a horrible hunch they may have been Rishi’s cheap shoes.
Meanwhile, as Nadine Dorries helpfully points out, Liz Truss is travelling the land in earrings that cost £4.50 from Claire’s Accessories.

I do hope there is a better reason to make Truss PM than the fact she wears cheap jewellery.

JUST 24 hours after fainting during The Sun’s Tory leadership debate, presenter Kate McCann was back on live TV, hosting a debate on the battle to be our next PM.

Coming back so soon after an incident like that takes professionalism and courage.

Kate has plenty of both.

Even if it was a relief to see her sitting down.

KATE Moss has not said a lot over the years.

There has been no sit-down with Oprah Winfrey or Piers Morgan.

She has never poured her heart out on the talk-show circuit.

But Kate’s Desert Island Discs – moving, eloquent, revealing – shows what the world has been missing.

The most revealing glimpse into Kate’s starry world was the anecdote about going shopping with legendary rock chicks Anita Pallenberg and Marianne Faithfull and then almost inevitably bumping into one of the Beatles, George Harrison.

You half expected Bob Dylan to pop out of the changing room to ask: “Does my bum look big in this?”

Kate’s life has been like an episode of Stella Street, where everyone she meets is a star, and Mick Jagger and Keith Richards are just the nice old blokes who run the corner shop, bickering over the Jaffa Cakes, and Roger Moore gives David Bowie a face flannel for his Christmas present.

THE sixth most popular movie in the UK and Ireland last weekend was Prima Facie.

This was the film of a one-woman National Theatre play starring Jodie Comer as a slick, cynical lawyer who defends men accused of sexual assault then finds herself as the plaintiff in a rape case.

Some context – the film just above Comer’s solo show was Top Gun: Maverick, while Jurassic World Dominion was just below it in seventh place.

Most of this summer’s hit films come from Hollywood’s greatest franchises – Minions, Tom Cruise in his aviator shades, Buzz Lightyear and those very angry dinosaurs.

And a one-woman play starring a brilliant 29-year-old British actress is holding its own with the lot of them.

BECAUSE of Germany’s grotesque addiction to cheap Russian gas, the country is now having to cut energy consumption by a whopping 15 per cent.

This means no heating or hot water in public buildings.

And a lot of dirty Hans.

Give us a break!

I WOULD rather poke myself in the eye with a stale baguette than attempt to drive into France.

Why go to a country where you are clearly not wanted?

The French are correct when they point out that it was the British who chose to leave the European Union, thus ending free movement.

But with a bit of goodwill on both sides, the chaos at the border with France could be avoided – Brexit or no Brexit.

After all, French passport holders are not being ritually humiliated before they enter the UK.

But there is no goodwill among our European neighbours.

If the French get the chance to punish us for daring to leave the EU, then they will.

That ugly spite is unlikely to make the British feel like re-joining the EU – or even taking a mini-break in France these days, as arduous as organising the Normandy landings.

You can put me down for two weeks in Cornwall, monsieur.

BORIS JOHNSON never looked happier than when he was lobbing hand grenades with Ukrainian troops during their military training in North Yorkshire.

Most PMs feel incredibly sorry for themselves when the final curtain comes down.

No wonder a poll shows 45 per cent of Tory voters do not want Bojo to go.

You can bet that it takes a lot of effort to look that good when you just celebrated your 53rd birthday.

J-Lo’s old flame and new husband, Ben Affleck, 49, seems to find it hard to stay awake on their honeymoon.

Now that’s what I call sad.

Game on for the girls

THE England v Germany game in today’s Euros final will get the kind of TV ratings usually seen for a royal wedding.

The tournament has caught the public imagination and women’s football has exploded – not least because of England goals no football fan alive could resist.

Alessia Russo’s outrageous backheeled goal against Sweden in the semi-final.

Let’s hope this ­stunn­ing­ly successful tournament has a lasting legacy at a grassroots level.

Back in the day when I was at school, the girls all played netball while boys all played football.

Today around 63 per cent of schools offer girls football for PE lessons.

The greatest triumph of this dazzling England team would be to see football open to every girl in the country.

Montreal’s Leylah Fernandez knocked out of Aussie Open by No. 4 Caroline Garcia

Previous articlePoker player Rishi Sunak has to raise the stakes if he wants to become PM
Next articleJuicy, thrilling…I for one am sad that Coleen and Becky’s Wagatha trial is over