ENGLAND’S Euro-winning Lion-esses have written an open letter to Rishi Sunak and Liz Truss asking the future Prime Minister to ensure that playing football is an option for every growing girl in the land.

Which is very polite of the Lionesses.

Because I can’t see anyone else who is acting as if Sunak has even the slightest chance of becoming our next PM.

Although there are still weeks to go before we discover the heir to Bojo, Liz Truss looks nailed on to be our third female Tory Prime Minister.

Everybody is already sucking up to Liz, longing for that coveted invitation to a top ministerial job or at least some tea and chocolate digestives in the Downing Street rose garden.

Incredible — for Rishi Sunak would be a brilliant Prime Minister. 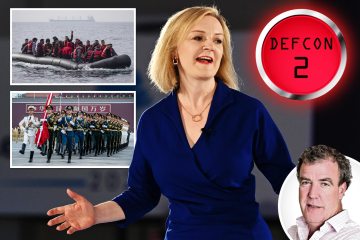 He is young, whiplash smart and clearly a decent human being.

He got fined during Partygate — and doesn’t even drink! If I was a member of the Conservative Party, I would be voting for Sunak.

But Truss is offering something that Sunak just can’t manage. Hope.
And people will always vote for hope.

Hope was what put Margaret Thatcher in office when our country seemed to be disintegrating.

Hope was what elected Tony Blair in 1997 when John Major’s tired Tories were ­constantly getting caught with their trousers down and their fingers in the till.

And when the aftermath of Brexit put our country in a political coma, this is what propelled Boris to his stonking 80-seat majority.

Hope. The hope that we can do better than this mess.

Truss is the former Remainer who is now our most passionate advocate of Brexit.

She is the former comprehensive schoolkid who understands in her bones what this cost-of-living crisis means for ordinary families.

Liz has an appeal that will strike a chord with former Labour voters.

But every sure-fire favourite is haunted by the ghost of Devon Loch, the racehorse who collapsed in the final straight of the 1956 Grand National.

Even an odds-on favourite can fall flat on their face.

If Truss has a weakness, it is a tendency to speak first and reflect on the consequences of her words at some later date.

When Russia invaded Ukraine, Foreign Secretary Liz said she “absolutely” backed any British citizen who wanted to go to help the Ukrainians fight for their freedom.

Defence Secretary Ben Wallace — a ­former Scots Guard who has actually heard guns fired in anger — politely pointed out that Truss’s own department urged British citizens not to travel to Ukraine and, if they wanted to help, to make a financial donation or enlist in the British Armed Forces.

But Truss’s instincts are sound.

And although I love old Bojo dearly, it will be a relief to be spared the green ­fundamentalism of his net-zero posturing.

And to move on from all those endless, self-inflicted Bojo cock-ups.

And the way every petty drama was turned into a national crisis.

From renewing your passport or driving licence to catching a train or plane, it feels as though nothing works in this country any more.

We crave change. We need hope.

The Bank of England is predicting ­inflation of 13 per cent by the end of the year and is warning of a long recession.

Sunak says he is not going to offer us “goodies”, even though he knows how much we love goodies, while Truss says that she would start slashing taxes on day one.

In a climate of doom and gloom, Liz asserts that a recession is not yet inevitable.

Human nature will always respond to a message of hope.

To stop Truss now will take an unexpected iceberg in the path of her unsinkable ship, a Gerald Ratner moment, a home straight cock-up of Devon Loch proportions.

Tories think it is all over. It is — almost.

KING Charles III will be a decent monarch – caring and compassionate, if a bit long in the tooth.

But he must stop accepting charitable donations from dubious characters.

The royal has raised eyebrows for receiving £1million for The Prince Of Wales’s Charitable Fund from two of Osama Bin Laden’s half-brothers in 2013.

News of the Bin Laden bung comes shortly after the Charity Commission decided it would not be investigating the £2.5million – in cash! – Charles accepted from an ex-PM of Qatar.

Not a great look, Your Royal Highness.

Thank goodness Reggie and Ronnie Kray are not still around.

“For the kiddies, Charlie,” the twins would growl, as they handed Camilla a suitcase full of grubby fivers on the doorstep of St James’s Palace.

OH, Jeremy Corbyn. With the twisted logic of someone who truly loathes their own country, the former Labour leader condemns the UK for “prolonging the war in Ukraine”.

And there’s me thinking that Russia might just possibly be to blame.

WHAT was shocking about the Euros final was not just that England finally won.

The biggest change from what we are used to was the lack of poison in the crowd. No coked-out morons.

No booing the opposition’s national anthem.

No mindless mob gate-crashing the party without a ticket.

No thicko stuffing a firework up his Wembley Way on, er, Wembley Way.

Proof that England matches can be played without England fans cavorting in a vomit-flecked, urine-splashed sewer.

AFTER 17 years of dreary left-wing orthodoxy, the BBC have pulled the plug on Mock The Week and Mr Potato Head himself, Dara O Briain.
Proof that cancel culture is not all bad.

SOME LIKE IT NOT – BUT ANA IS A GOOD MARILYN

ANA DE ARMAS plays Marilyn Monroe, in a new Netflix drama and already the Cuban bombshell is getting stick for daring to play the ultimate American icon.

“I never knew Marilyn had a Spanish accent,” sneered one troll.

Because from what I’ve seen, Ana’s impersonation of Monroe is uncanny.

NICHELLE NICHOLS, who has died at the age of 89, made her first appearance on Star Trek in 1966, right.

It is impossible to imagine just how groundbreaking it was to have a major black character in a hit TV series in the mid-Sixties.

Nichelle’s Lt Nyota Uhura was smart, strong and drop-dead gorgeous. All this was revolutionary.

She played the Enterprise’s communications officer from 1966 to 1969.

By the time Uhura hung up her scarlet, skin-tight Star Trek uniform, a generation had grown up believing that a multi-racial cast was totally normal.

As much as Muhammad Ali or any star of Tamla Motown, Nichelle Nichols changed hearts and minds.

CHINA is an economic superpower, but when it comes to military might it still has the L-plates on.

While the British and Americans fought in Vietnam and the Falklands, Iraq and Afghanistan, China has not fought a war for a lifetime.

For all the bluster and chest-beating since US Speaker Nancy Pelosi’s flying visit to free, democratic Taiwan – which China sees as a breakaway province – China looks like every other playground bully in history.

Like his pal Putin, President Xi Jinping is a weak man pretending to be a strong man.

There’s a theory that Communism will finally end in China when China invades Taiwan – and catastrophically fails.

This week that day edged a bit closer.

SLUR ON SONG IS NASTY

HOW depressing that within weeks two musical superpowers are insensitive enough to toss around the term “spaz”.

First Lizzo faced a backlash for using the abusive term in her song Grrrls.

Now Beyonce has drawn flak for using “spaz” on her collaboration with Drake.

Both Lizzo and Beyonce use “spaz” as a euphemism for going crazy.

But the term is derived from spastic and is historically used as a derogatory slur against people with disabilities, especially cerebral palsy.

It should not still need explaining that the term is deeply, terminally offensive.

The disabled have enough on their plates without privileged superstars using derogatory terms to spice up their act.