TAKE a look at the ocean of flowers ­outside the palaces and royal residences.

Look at the mourners queuing for miles alongside the Thames for a few fleeting moments opposite the Queen’s coffin.

Look at the staggering numbers expected in London on Monday.

Look at the forecasts for global TV viewers . . . as many as four billion, more than half the population of the planet, the biggest television event in history.

These are the true measures of the Queen’s worldwide fame, the popularity of our Royal Family and the fascination it holds — which we confidently predict will remain undimmed long after the new King’s reign is well-established.

This is the real world — not the broiling, hate-filled version on social media where troll after nameless troll spits bile about unelected royals and their total cost to the public purse (a cost, in fact, vastly outweighed by the income they bring into Britain). 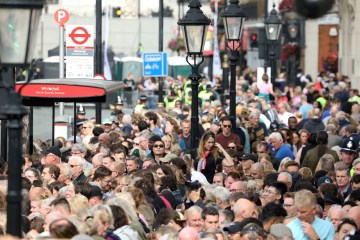 And where tone-deaf, forgotten talent show novelty acts try to reclaim the spotlight by abusing the monarchy.

We do not, thank God, live in the world of Twitter, that magnet for the hateful and clueless. Nor in the imaginary Britain of the woke infants at the New York Times, hacks so addicted to that social media cesspit that they devote their careers to concocting lies about the UK for “likes”.

It helps them pander to the know-nothing US Left to pretend from 3,500 miles away that Britain, post-Brexit, is a nation of white supremacists. It is laughable. We all know the reality.

Look at the array of races, creeds and ages united in that queue to honour our Queen.

Our people love the pageantry, tradition, continuity and stability the monarchy provides.

They love that the best of our Royal Family dedicate themselves to unstinting duty and service.

Mostly the royals remain in the background of our lives. Occasionally — as with the weddings of William and Harry and the deaths of Princess Diana and now the Queen — they are thrust centre-stage.

Then, Britain does not ­hesitate to show its love and support.

Royal fans, and they are the overwhelming majority, crave no alternative. They have seen the troubles of some nations with elected Presidents. It’s not for them.

Britain’s dwindling band of republicans can rant. It’s a free country. But they are wasting their breath. Twitter is the only place they have any traction.

Good luck with that.

In Denver, Festivals and Food Are on the Rise

Streaming services are where movies go to die. But we will always have the crew merch