HAVE you been vaccinated against World Cup fever? Are you free from all the symptoms this time around?

You know what they are — the euphoric optimism about England’s chances.

The cockle-warming nostalgia as we recall the agony and the ecstasy of summers long gone.

And the pre-World Cup adrenaline rush that only comes around once every four years.

But according to the polls, there are plenty of people who are just not feeling the fever for a winter World Cup in Qatar.

And maybe those polls genuinely reflect public concern about Qatar’s deficiency in human rights and widespread revulsion about the bent functionaries at Fifa who awarded Qatar the World Cup in December 2010. 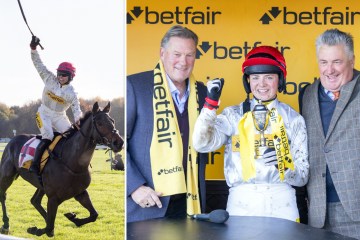 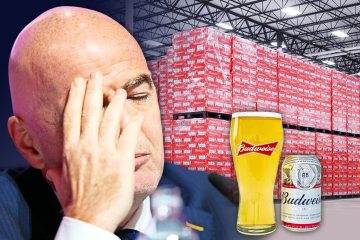 Qatar is a country where the authorities are accustomed to having things done exactly their way.

Witness the last-minute cancellation of allowing beer to be drunk in the stadia, seemingly oblivious to the outrage of tournament sponsors -.

And then there is distaste surrounding England’s opening game against Iran, a country busy brutally crushing protests after Iranian police beat a woman to death for having her hijab on the wrong way (although there is no reason to believe the Iranian players support their brutal Government rather than the protesters).

Yes, I know plenty of football fans who plan to sit out this World Cup. But not me.

I am already reeling with excitement. But then I am a hopeless case, a Jules Rimet junkie from way back, a hardcore World Cup addict, because the first World Cup I can remember is 1966.

I even went to one of the games with my dad, and it remains the most vivid memory of my childhood.

The only time I ever said “f***” in front of my mum in my life was when Germany equalised at the end of normal time in 1966.

And I suggest there’s a good chance that all the negativity will evaporate over the course of a Harry Kane hat-trick or a mazy Bukayo Saka dribble or a spectacular James Maddison free kick or a triumphant penalty shootout.

If England get to line up against Germany or Argentina or Brazil — and I predict that they will — then it will be impossible for any football fan to be indifferent about the Qatari World Cup.

When migrant workers have died to build the stadia that millionaire footballers will grace, it would be crass to say let’s just enjoy the football.

But all World Cups tend to transcend the flaws and failings of the host nation.

When French President Macron was dancing on a table in Moscow in 2018, Emmanuel probably wasn’t thinking too much about Russia’s annexation of Crimea in 2014, or the fact that, in 2012, Moscow courts passed a 100-year ban on gay pride marches.

Just four years after hosting Putin’s World Cup, Russia’s rabble army launched a murderous ground war in Europe and pushed mankind closer to World War Three than we have been since the Cuban Missile Crisis.

Does anyone seriously suggest that Qatar in 2022 is more morally reprehensible than Russia in 2018?

The protests about Qatar — eight national captains, including Harry Kane, will wear rainbow armbands in solidarity with the LGBT community — are well-intentioned but in danger of being nothing more than empty, hollow gestures.

“When we are in France, when we welcome foreigners, we often want them to follow our rules, to respect our culture, and I will do the same when I go to Qatar,” Lloris says.

“I can agree or disagree with their ideas, but I have to show respect.”

Do we kid ourselves we are perfect? When Bobby Moore lifted the World Cup in 1966, this country was still a full year away from the Sexual Offences Act of 1967, which legalised homosexual acts in England and Wales as long as they were consensual, in private, and between partners over 21.

It is over 60 years since I was taken to the football for the first time, and I have still never seen two men holding hands at an English ground.

So let’s dial down the virtue signalling just a touch.

Let’s not spend the next month polishing our halos.

Because we are all in need of a break from the unremitting misery of these hard times.

NO PEACE WITH PUTIN ALIVE

THE cowardly West will fight Russia down to the last Ukrainian.

We want Putin defeated, but fear provoking the twitching madman into reaching for his nukes.

But this week a missile hit a Polish village, killing two men.

Ukraine claims it was a Russian missile.

The Russians claim it was Ukrainian.

Whoever dropped that missile into a Nato country, it reminded us how perilously close we are to escalation.

And that there can be no peace for Europe while Putin breathes.

AS predicted in an episode of The Simpsons from 2015, Donald Trump will be running for President of the United States in 2024.

One detail The Simpsons got wrong: Trump’s latest slogan is “Make America Great and Glorious Again”, while in the episode Bart To The Future, Trump’s catchy battle cry is, “America – You Can Be My Ex-wife.”

But Trump is deadly serious. And what a disaster it would be for America if this democracy denying narcissist got another chance.

Joe Biden was no improvement.

As Trump announced his campaign, Senility Joe thanked the President of Colombia for the strong ties he was building with the US.

The trouble was that Biden was talking to the President of Cambodia at the time.

Trump for a second term?

America would be better off with Homer Simpson.

THERE IS A WAY BECK

BORIS BECKER will be quietly deported back to Germany before Christmas after spending seven months in a British jail for concealing £2.5million worth of assets after declaring bankruptcy.

When Boris skulks back home, he will probably feel like his best days are behind him.

But two high-profile ex-jailbirds have reinvented themselves recently.

Tony Adams, who did 58 days in Chelmsford Prison after a drink driving offence in 1990.

And Boy George, who was sentenced to 15 months for false imprisonment after handcuffing a male escort to a radiator.

So there is a way back for Becker.

If he can bear a month in the company of Tess and Claudia or Ant and Dec.

ROYAL insiders are forming an orderly queue to point out that The Crown is largely invented hokum.

This week, our late Queen’s former lady-in-waiting, Anne Glenconner, 90, appeared on BBC’s The One Show to promote her book Whatever Next?: Lessons From An Unexpected Life.

She pointed out that – despite what the Netflix show had suggested – she never actually made a racy remark to Princess Margaret about a young man’s pert bottom.

But there is something The Crown almost certainly got right. The best bit in the fifth series was when Princess Diana (Elizabeth Debicki) sees heart surgeon Dr Hasnat Khan (Humayun Saeed) for the very first time.

It is an astonishing piece of television, gloriously free of writer Peter Morgan’s seething republican fantasies.

Debicki’s Diana just stares at the overweight, Wotsits-eating doctor as if she is a woman contemplating the unlikely love of her life for the first time.

Debicki’s princess says nothing. Her eyes do all the talking. And they speak volumes, they write sonnets of love – and you believe every melting moment.

BROOKLYN BECKHAM recently said that he isn’t a famous footballer like his dad David because he is a Pisces.

“It got to the point where I was just, like, I really want to make my own name for myself and work my arse off,” says Brooklyn, who played at a high level until his mid-teens. “I’m a Pisces. Sensitive.”

I think astrology is an absolute load of baloney.

But then I would say that, wouldn’t I.

I am a Scorpio, after all.

THE Tories hate White Van Man. They loathe the self-employed.

They detest anyone with an ounce of aspiration in their bones.

Jeremy Hunt’s Autumn Statement revealed a Tory party that wants to pat all welfare recipients on the head and kick everyone else in the teeth.

These independently rich Tories have all of Labour’s soft spots now.

They will chuck billions at the bottomless pit of the NHS and you still will not be able to see your local GP.

So it is reasonable to ask: What are the Tories for?

If the Conservative Party are going to enjoy every second of taxing grafters as we have not been taxed since 1945, then what is the point of the Tories?

How are they any different to Labour?

The answer was revealed this week when two Tories became the unlikeliest of sex symbols.

First Twitter was reeling with hot flushes as we were further acquainted with Jonny Lee Miller as The Crown’s incarnation of a hunky, spunky, silver fox John Major (possibly The Crown’s greatest distortion of true life).

Then impressionable young women started coming forward to confess that there was something strangely, even shamefully, alluring about seeing Matt Hancock – Matt Hancock! – get his cakehole around a kangaroo’s nut sack.

Clearly the only reason for the Tories to exist is to fuel the sexual fantasies of the nation.

Beyond the birds and bees: How new services and tech are helping us make babies in unexpected ways

Previous articleTories should stand up for the strivers, the go-getters & the risk-takers to tackle inflation and slump
Next articleHe’s baack — and here we go