IT has been a wonderful thing  to see – the thousands of people queuing to pay their respects to the late Queen.

Watching the miles of queues in Westminster and the crowds that lined the procession from Balmoral, it looks like the nation is truly recognising what we have lost.

But if we are to pay proper tribute to our late Queen then it seems to me we should reflect not just on how we miss her, but why we miss her.

One reason is because she represented values that we sense we have lost. It is a strange thing.

We clearly admired Queen Elizabeth for her virtues. For her consistency and courage, her decency and steadfastness.

Her putting of others — and especially the nation — ahead of herself. 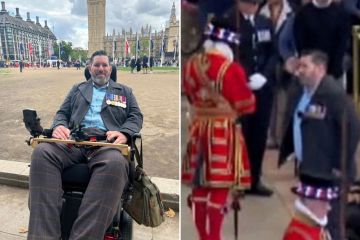 And yet these virtues are completely the opposite of the ones that our own age seems to hold to.

It is the age of the “influencer” — the person who puts themselves at the centre of the universe and pushes everybody else to the sides.

It is the age of the selfie, where it seems as though it is our presence that makes other things interesting.

You see some of this among those usually hyperactive types who, instead of silently paying their respects to the Queen as her coffin passes, whip out their mobile phones and hold them aloft, desperate for a moment to share with their “followers”.

Desperate to put themselves at the centre of the event. To show other people that they were there.

And, in a way, that is precisely the opposite of the sort of attitude that the Queen stood for. You may say that it is easy to avoid trying to be the centre of attention if you are the monarch.

But it is also the case that she stood for a more self-restrained age.  An age in which people did not try to be showy. In which you did not have to put on a show of displaying emotions in order to be known to have them.

We all have memories of that Britain. The pre-Diana Britain, you might say. Certainly the pre-Meghan Britain.

The Britain where people played themselves down instead of bigging themselves up. Where self-deprecation was the national sport, rather than a culture of self-esteem.

This was the Britain that many of us grew up with and it is a Britain that often seems unrecognisable from the one we currently inhabit.

Certainly, there were things about that Britain that it was good to change.

But the opposites turn out to be  infinitely worse. Letting your emotions out all the time isn’t good for you either, and certainly isn’t good for the people around you.

Having a permanently wobbly lip isn’t much fun for anyone.

The Britain of restraint and calm and quiet emotion is a Britain that some of us still miss.

And they were epitomised in the form of the late Queen.

When she swore herself to a life of service to this country, aged 21,  it wasn’t an empty promise. And it wasn’t one she ever broke.

She kept that promise right to the very end, in spite of the pain it must often have been and the boredom that must have occasionally set in.

It seems to me that one of the reasons why we are in mourning is because we still value the virtues that the Queen epitomised — of quiet service and dignified restraint.

But it is odd to respect values that you no longer hold.

People will be saying a lot in the days ahead about what the Queen meant to us and what we have lost. And it will be sincere and true.
But perhaps the greatest honour we could do her is not just to admire her but to emulate her.

And to remember that a life of service to people other than ourselves is not a wasted or unnoticed life but is, in fact, the best life of all.