WE need to talk about BoJo. About what lies ahead for our soon-to-be ex-PM.

About a bereft and divided Conservative Party — and about the damage he could inflict on his way out.

What are his thoughts as he sips iced ouzo on his second overseas holiday in two weeks?

First, we can kiss goodbye to the idea Boris Johnson will quietly leave the building and follow Tony Blair, John Major and David Cameron on the road to corporate riches.

Nor will he settle for earning a derisory million quid a year on the American speaking circuit like Theresa May.

Or a plum role on the world stage, such as Nato Secretary General — a proper job most ex-leaders would die for. 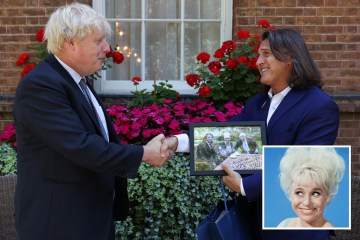 For Boris, it would be like signing up for a stretch in Belmarsh. He has bigger horizons — as a mega-rich global superhero, the nearest thing to “World King”.

“He will create his own world stage,” says a close ally.

“Some are drawn like moths to the flame. Boris Johnson IS the flame.”

Despite being hounded from office in what some portray as disgrace, BoJo is a phenomenon, an incorrigible attention-seeking, money-spinning mischief-maker.

He was a shooting star long before delivering Brexit and surfing an election landslide into No 10.

As a humble newspaper columnist, he made waves and created hell for elected politicians.

As Mayor of London, he drew crowds 300-deep to the Conservative Party fringe.

Who else could turn near-emasculation on a zip wire into a flag-waving impression of fun?

Imagine what is possible for such a five-star political entertainer let loose on global media with the capacity to praise or damn with a well-turned joke.

How will (presumably) Liz Truss handle her live TV eclipse when the Brexit martyr is greeted by an adoring Tory mob at her party conference debut this autumn?

And what does a new Prime Minister do with such a force of nature, whether he remains an MP or is kicked out by a trumped-up kangaroo court run by blatantly partisan critics?

This is the subject of live discussion behind cupped palms among Tory grandees.

They can save their breath. The Great BoJo Myth is already gathering pace.

It portrays a flawed hero, betrayed by the party he led to victory and the media who hounded him out of office.

The story skims over Boris being his own worst enemy, the missed opportunities and unforced errors.

Had he paid more attention to his own promises, he would not be packing his bags today.

A long trail of Tory incompetence has emerged like jagged rocks after 12 complacent years in power — not least a record 20,000 cross-Channel migrants arriving in small boats so far this year alone.

Voters see all this, of course, yet they are beguiled by the Greek tragedy of BoJo’s shambolic rise and devastating fall.

A new poll by former Tory party deputy chairman Lord Ashcroft shows the Partygate scandal and other bungled crises left a whopping two out of three (67 per cent) disapproving of his character and personal conduct.

Yet more than eight out of ten (84 per cent) of those who voted Tory in 2019 believe he did a good job as Prime Minister.

The secret of Boris Johnson’s relentless popularity is that people can hold both views at the same time — and still rush to his side for a smiling selfie.

The question now, as he and Carrie wave goodbye, is how Boris Johnson will fill his days.

Well, don’t worry too much.

He has no plans to resume his career as a weekly newspaper columnist, although there will be bestsellers and highly lucrative TV and movie options.

Nor is he likely to stick around, like Donald Trump, for another shot at the top job.

Too humdrum and just as likely to end in tears again.

“The big test will come in two years’ time,” says one staunch ally. Will he help us win the next election?

“Will he, in the end, show loyalty to a party he believes has shown no loyalty to him?

“Even after knowing Boris for years, I have no idea.”

THE horrific knife attack on author Sir Salman Rushdie is the ultimate act of censorship, brutally inflicted as a fatwa in the name of Allah.

Rushdie almost paid with his life for a passage in The Satanic Verses about the Prophet Muhammad.

The real reason is her outspoken defence of women’s rights to privacy from men who say they are women.

It is beyond shocking that we now live in an age when free speech is an invitation to murder.

News24.com | Woeful Bulls outplayed, outmuscled in the snow as Lyon hand out a rugby lesson

The paint must hit from all angles on the lowrider cyborg. Enter Mario Ayala

Previous articleWe are in the midst of a national emergency. Labour would stop energy prices rising this winter
Next articleA hit-and-run driver killed my husband — please slow down