ITV, 6am. The heat apocalypse is here.

You must surrender all hope, burst your inflatable unicorns and hydrate like SpongeBob SquarePants.

Or you too will spontaneously combust, like thousands of other Britons, if not now, then a week on Friday or whenever else the weather map’s next red blob of doom arrives.

But that was the underlying message I got, on Monday and Tuesday, from Good Morning Britain, where the cheerful sods kicked off the week by announcing: “Temperatures could reach 41 degrees Celsius, posing a risk of illness and death, even among those who are fit and healthy.”

The prophets of doom were the unlikely pairing of Ranvir Singh and Ed Balls, who speak with one woke voice yet bring different issues to the table. 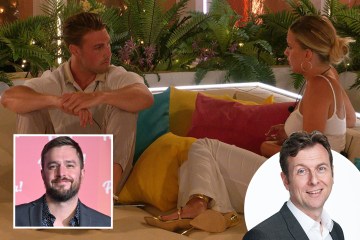 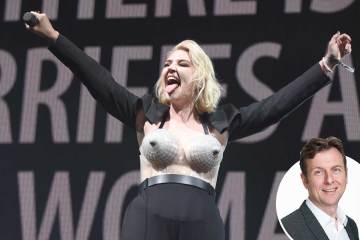 Ranvir always gives the impression she’s much more comfortable with senior Labour Party bigwigs than her own viewers, but she can at least read an autocue and remember the name of her own reporters.

A contrast with Ed, who’s struggling with the awkward transition from politician to normal person and has a tendency to heckle any guest who doesn’t toe the alarmist line — “10,000 deaths!” — and hit you with anecdotes that are far more unsettling than he imagines.

“What I learned from running marathons is, the first time you feel thirsty, it’s already too late . . . ”

It wasn’t just Ed and Ranvir, of course.

GMB had some excellent reporters, like Nick Dixon and Lorna Shaddick, sweltering in the field, plus the two most prominent members of the show’s fun police with them in the studio.

The first of these is Dr Hilary Jones, wearing no tie to illustrate the severity of the situation and advising viewers to sleep with “a sock full of frozen rice”, which I think I once did, back in the 1990s and regretted it horribly the next morning.

The other is meteorologist/weather girl Laura “I told you so” Tobin, who’s always on the climate-change case and almost seems to have been craving these conditions since she presented a spoof report, in 2015, which predicted 40C temperatures across Britain and Ireland.

If Laura was so convinced environmental armageddon was on the horizon, you might also have wondered why A) She said: “What I once thought was impossible is now possible.” And B) Starred in ITV’s motor-racing show Drive the following year.

These, in fact, are possibly the type of questions Piers Morgan would’ve been asking, on air, during his time hosting GMB when it became the most intoxicatingly unpredictable and exciting live show on television.

No more, sadly. With the occasional and honourable exception of Richard Madeley, group-think now rules here.

Dissent isn’t tolerated, not even from the people who pay the presenters’ wages.

To the point Ranvir Singh could not disguise her utter disdain when she read out some of the viewers’ emails to the show.

“Benny says, ‘So much scaremongering. We just need to get on with it’.”

She followed it up by ordering England’s Deputy Chief Medical Officer, Dr Thomas Waite, to tell them: “Why they are wrong and you are right.”

But they’re not “wrong”, are they? They’re just questioning the patronising and alarmist tone of the show, which is hardly helped by the fact GMB brings the same head-patting approach to almost every “concerned” report.

Even including a Monday item about the return of wild bison to Britain which could not be concluded without GMB assuring viewers the animals would be behind “Two fences”, just in case you thought they’d be stampeding down Oxford Street.

It’s this endless repetition and obsession with nannying, as well as the lofty, self-righteous manner, that ultimately dilutes perfectly sound and sensible medical and environmental messages and causes huge viewer resentment, not just on GMB but right across mainstream television.

Less is always more, although the most convincing warning of the lot, on Monday, was actually a simple slip of the tongue from Lorna Shaddick, on Deal beach, aimed at: “People who might have gone out on an inflatable unicorn and got cock-cut off by the tide.”

Be careful out there, lads.

Great TV lies and delusions of the week

Getting Filthy Rich, Olivia Attwood: “I don’t want to make it all about me.”

Love Island, Ekin-Su to Davide: “I’m not asking you to worship me.”

VAR: A clear and obvious error.

THE Chase, Bradley Walsh: “Fought on English soil, which 1066 battle was won by the Duke of Normandy?”

Jamal: “The Battle of Wellington.”

Bradley Walsh: “What sea reptile follows the word ‘mock’ in the name of a soup?”

Tipping Point, Ben Shephard: “What letter precedes the word Day in the name of the World War Two landings of June 1944?”

Luca, Davide and Dami firmly establishing themselves as the most unpleasant and controlling Love Island contestants ever.

The next football pundit who uses the phrase: “Executing the game plan.”

And Last Leg hypocrite Adam Hills following suit by claiming the problem with the Tory party membership is its “predominantly white”.

The problem with The Last Leg being neither the fact it’s exclusively white nor entirely male, but that it’s never remotely funny.

Atwood and the filthy rich

FOLLOWING stints on Love Island, Celebs Go Dating and Celebrity Karaoke Club, presenter Olivia Attwood began the third episode of ITV2’s Getting Filthy Rich by announcing: “I’m going to spend a day shift at a camming studio in West London where they’ve got over 150 webcam girls on their books.”

So it would be wrong if, in all sincerity, I didn’t say: “Congratulations on the promotion.”

Caption of the week

SKY News, Monday: “Experts have advised people to drink plenty of water and stay in the shade.”

Thank you, experts. However would we cope without you?

FARA WILLIAMS: “If they want to move on, Norway will have to move on.”

Jos Buttler: “Today we came third in a two-horse race.”

Alex Scott: “Miedema took the game by the scruff of her neck.”

Gabby Logan: “It’s the sort of performance we’ve known to grow and love.”

“Trump’s only lasting achievement appears to have been a damaging deterioration in the relationship between Mexico and America,” she fizzed, with unconcealed rage.

A fair enough opinion on such an obvious wrong ’un, you might very reasonably think.

But it ignores the awkward fact that the Tijuana/San Diego section of the border wall was built by the Democrat administration of right-on darling Bill Clinton, who along with Barack Obama constructed far more of the barrier during their presidencies than Donald Trump did.

Predictably enough, though, this detail didn’t get mentioned by the show.

An omission which is either down to laziness and ignorance on their part, or the fact TV people will only give a toss about “heart- breaking divisions” if they’re caused by a right-of-centre politician who Channel 4 and the BBC don’t like.

Neither is a great look.

Claim of the Week

Paul Hollywood Eats Mexico, the host: “That doesn’t look like any clam I’ve ever seen.”

And he’s been out with Summer Monteys-Fullam.

THIS week’s winner is Sky News reporter Beth Rigby who, without make-up, is Grumio from Plebs. Sent in by Dave Wright.

TV Gold? In this week? You’re kidding. Suspended until television pulls out its finger.

Previous articleRepublicans: The views of many lost in ‘bombastic diatribe’
Next article737 MAX crash: Pursuit of justice