NO matter who becomes Prime Minister our veterans can stand easy thanks to The Sun.

Their rights will be protected and the Tory manifesto promises to them honoured by both Rishi Sunak and Liz Truss.

Which means a fully funded, fully staffed Government office for veterans’ affairs, with a Cabinet-level minister.

And the end of the nightmarish probes into historic allegations for those who served decades ago in Northern Ireland.

And our Veterans Pledge isn’t all that now unites the two contenders for No10.

Both say they will cut energy bills . . . Liz by slashing green levies, Rishi by stripping VAT from them. 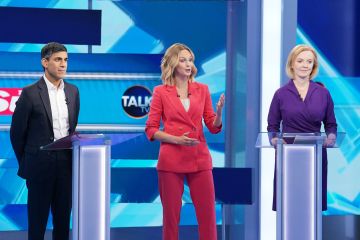 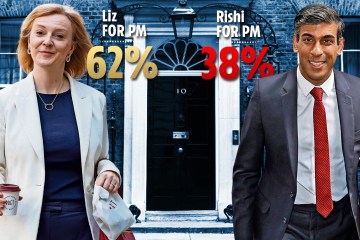 Hugely welcome. But we have to ask: Why haven’t both happened already?

Removing VAT on energy was a much-heralded benefit of Brexit.

Why wasn’t it done the moment we finally left the EU?

HOW do the multi-millionaires running our failing water monopolies sleep at night?

We are facing drought measures, hosepipe bans and warnings to preserve water.

Curbs on farmers will mean smaller yields and higher prices — when shopping bills are already soaring.

Lack of rain isn’t the fault of these firms.

What IS scandalous is a quarter of Thames Water’s supply leaking away while its boss trousers £3.2million over the last two years.

Or Severn Trent letting 446million litres a day seep into the ground while paying its chief executive nearly £7million since 2020.

How dare these fatcats tell us to cut our usage? Why not slash their salaries and undeserved bonuses and hire enough crews to fix more leaks?

Nothing tarnishes capitalism’s image faster than exactly such abuses.

FEEBLE fence-sitter Keir Starmer is now caught in the crossfire between the unions he secretly backs and the enraged public whose votes he needs.

Yesterday Labour’s leader belatedly mustered the courage to fire Sam Tarry, boyfriend of Starmer’s deputy Angela Rayner, for joining an RMT picket line in casual defiance of his order not to.

Starmer and his party DO back the militants.

Their public fudge — supporting “working people fighting for better pay” from employers, while absurdly blaming the Tories for the strikes — is a ruse to hoodwink voters that they are a “Government in waiting”.

Not with the voting public — but with the hard-Left wreckers who use them as cannon fodder in their endless disputes.

Previous articleHelp Seattle restaurants survive: Fix delivery-fee cap at 15%
Next articleNews24.com | FRIDAY BRIEFING | SACP and its new leadership: 'What is to be done?' (And is it still relevant?)